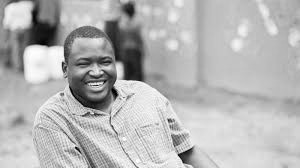 Kennedy Odede is one of Africa’s best-known community organizers and social entrepreneurs. Kennedy grew up in Kenya's Kibera slum, the largest slum in Africa, where he experienced the devastating realities of life in extreme poverty first hand. At age ten he became a street child. Still, he dreamed about changing his community. In 2004, he had a job in a factory earning $1 for ten hours of work. He saved 20 cents and used this to buy a soccer ball and start Shining Hope for Communities (SHOFCO). Driven by the entrepreneurial spirit of the people of Kibera, SHOFCO became the largest grassroots organization in the slum. Today, SHOFCO impacts over 1.5 million slum dwellers across 14 urban slums in Kenya. SHOFCO is on the front lines of COVID response in Kenya’s urban settlements, delivering health care, WASH, food relief, and economic stability at scale. In 2018, SHOFCO became the youngest-ever organization to receive the Conrad N. Hilton Humanitarian Prize, the world's largest humanitarian prize awarded to nonprofits that have made extraordinary contributions to alleviate human suffering. Although he was entirely informally educated, Kennedy received a full scholarship to Wesleyan University, becoming one of Kibera’s first to receive an education from an American liberal arts institution. He graduated in 2012 as the Commencement Speaker and with honors in Sociology. He later served on the Wesleyan Board of Trustees. Kennedy was awarded the 2010 Echoing Green Fellowship, which is given to the world’s best emerging social entrepreneurs. He was named to FORBES &quot;30 under 30 list&quot; for top Social Entrepreneurs in 2014. Kennedy is a New York Times best-selling author of Find Me Unafraid: Love, Hope, and Loss in an African Slum, co-written with his wife and partner, Jessica Posner Odede. Kennedy has published opinion articles on urban poverty in The New York Times, CNN, The Guardian, Project Syndicate. His work has been featured by President Bill Clinton, Chelsea Clinton, and on multiple occasions by Nicholas Kristof in The New York Times. Kennedy previously served on the United Nations International Commission on Financing of Global Education Opportunities. Kennedy is a Young Global Leader (YGL) at the World Economic Forum, an Obama Foundation Africa Leader, and a UBS Global Visionary.