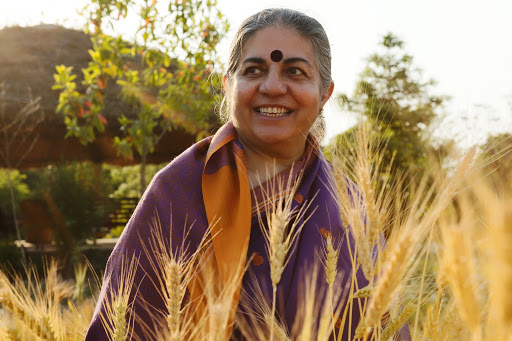 Dr. Shiva is a trained Physicist and did her Ph.D. on "Quantum Theory” from University of Western Ontario in Canada. Later on, she shifted her focus on interdisciplinary research in science, technology and environmental policy, which she carried out at IIIM Bangalore. She is the founder of Research Foundation for Science, Technology and Ecology based in Dehradun which is dedicated to high quality and independent research to address the most significant ecological and social issues of our times. She also founded Navdanya, a national movement to protect the diversity and integrity of living resources, especially native seed, the promotion of organic farming and fair trade. In 2004, she started Bija Vidyapeeth, an international college for sustainable living in Doon Valley in collaboration with Schumacher College, U.K. In 2010, Dr. Vandana Shiva was identified as one of the top Seven Most Powerful Women on the Globe by the prestigious Forbes Magazine. Dr. Shiva has been the receipt of many national and international awards and honorary doctorates. She has won the Alternative Nobel Prize (Right Livelihood Award, 1993), Order of the Golden Ark, Global 500 Award of UN and Earth Day International Award, Lennon ONO grant for peace award by Yoko Ono in 2009, Sydney Peace Prize in 2010, among many others.