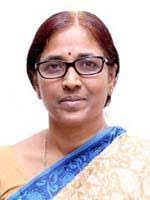 Professor and Director
Centre for Economic and Social Sciences

Dr Revathi Ellanki is a Development Economist. She attained her M Phil and PhD degrees from Kakatiya University, Warangal. She was an ICSSR doctoral fellow in ‘Women’s Studies’ during 1988-91 and worked on ‘Women, work and technology in agriculture’ for her PhD. She was a professor in the department of Economics, Kakatiya University from 1992 until 2004. She was a Visiting Fellow at CESS during 2004-09 and joined at the Centre as full time Professor in 2012 teaching Agriculture (Structural Issues), Development Economics and Gender Studies. She was a member in the curriculum development group for Economics constituted by the Telangana State Public Service Commission in 2015. She contributed to the Group of Ministers appointed by Govt. of India on Bifurcation of the State of AP on Special needs of the Backward Districts of Telangana (2013). yet to add mission bhagiratha related background.

Session 1: Jal Jeevan Mission – A game changer for the provision of assured and safe drinking water at a household level