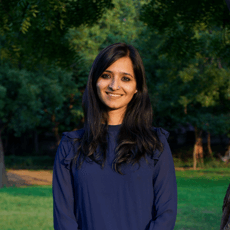 Aprajita is the founder & CEO of Haiyya, a youth-led feminist organizing and movement building organization established in 2015 in India. She has been organizing on gender, sexuality, health, climate and political participation issues for the past 10 years. She studied Leadership, Organizing & Action courses in 2016 and has been working closely with Professor Ganz and Leading Change Network to develop organizing infrastructure in India and South Asia. She also chairs a global Youth Climate Fund at Urban Movement Incubation Fund. She has been the core team member of Mobilisation Lab and Campaign Academy India. She was recently selected as the founding member of Indian Women Social Entrepreneurs Network of ANDE and Amani Institute. Other than social justice, feminism and human rights, she is passionate about cooking, plants, sunsets and obsessed with her niece and her 6 year old beagle.