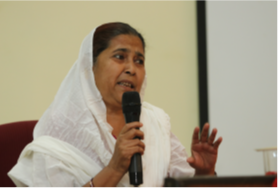 Anwari Khan is a team leader working on combating violence against women and girls in low-income communities of Mumbai and received the ‘Woman achiever award’ in 2016. Married at the age of 13, Anwari migrated to Mumbai many years ago. Her relentless attempt to be a ‘good, tolerant, unquestioning’ woman crumbled down when she saw her daughter going through the vicious cycle of marital violence. Her act of openly supporting her daughter and acting against all odds in doing so later led to her deep work with women and girls on combating violence. Anwari has been in the team of co-researchers in academic research on ‘Meanings of women’s empowerment. A firebrand leader as she is known today, Anwari has emerged to be a huge support within and outside of her family.